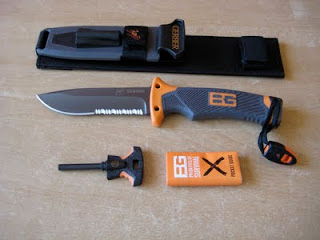 We have all seen him on TV, Bear Grylls, the fantastic survival expert. He and Gerber knife company has now come together and released a line of knives, multitools and survival gear.
I went out and bought the Ultimate Survival Knife. If you believe the advertising you will fall down dead if you walk off the asphalt (or go beyond the 50-signs, as we say in Sweden) and dont have that knife, and I dont want to die.
Anyway on to this supermagnificent piece of survival knife.
The package:
It arrived in a plastic and paper package, like a USB-stick or headphones. Nothing fancy at all, except the ”American” warning labels on the backside. One stating something like ”The firestarter can be hazardous and it is neither Bear Grylls or Fiskars fault if you burn down half of Derdap”. The other one is about the same ”Sharp edges can cause injury bla bla.” One thing that struck my mind was that the sign also said that prying and hitting the back of blade can be dangerous. Hey, you can pound the back of a Mora knife you get at Shell for 3 euros and it survives. The Ultimate Survival knife doesnt seem so Ultimate anymore.
What is in the package:
When you manage to get into the package you find the knife, a whistle a sheath, a firestarter and a folder with survival instructions.
The knife:
The blade is hollow grind and has a false edge. The blade nearest the handle is serrated, which to me is useless. In Scandinavian knife tradition you cut close to the handle, now that can not be done.
On top of the blade there is a part that has been grinded sharp in order to work with the firesteel.
Just like with a Fällkniven knife.
The handle:
It looks like a Gerber LMF II but the handle is more textured and has some kind of finger grooves.
There is a big metal butt if you want to hammer things, however earlier models had problems with it, the handle shattered since the butt was only glued on. I do not know how this model works but the blade and butt is not connected to each other. The quality on the handle feels like a toy knife.
The sheath:
Well, the lock mechanism is about the same as on the LMF II, the strap on the handle has velcro on it. On the sheath itself there is place for the firesteel, which is about 40 mm that hangs upside down, I guess you could snag that somewhere and lose it. On the backside of the sheath is a diamond sharpening stone. There are three belt loops on the back. One for a belt about 50 mm to hang it the normal way and two if you want it horisontally or or on a shoulder strap. There is also a small pocket for the survival instructions on the back. There is no drain hole in the sheath so if you get water in it, it stays there. 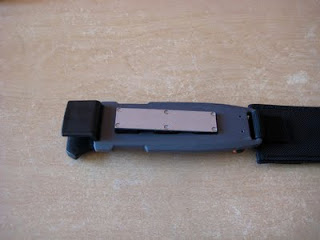 The whistle:
Well, it is a whistle like those you have on your zipper, nothing fanzy at all. I suggest that you bring an extra in case it gets lost. The lanyard included is too short for a proper lanyard anyway.
The Pocket Guide:
It is printed on some plastic like material and contains information on how to get fire, shelter, food, water and rescue. If you are stuck in the middle of noweher it is a bit late to read up on your skills, you should read it at home beforehand. The Swedish armed forces has a pocket guide called ”Fickminne Överlevnad” that is better than this.
Did I miss anything?
Well, compared to european knife culture it is big and clumsy, but since the expected customers are Bear Grylls groupies more than hard core survival experts I guess it works.
Would I put one in my belt and use it in the outdoors. First it looks too toylike and at the same time dangerous in the eyes of ”the average person” (swedish expression ”Medelsvensson”). Secondly it has too many flimsy parts that can be lost. Third I dont like the serrations or that the butt is not connected with the blade. The idea of having the knife, the fire thing and the whistle is not that bright. If you loose you loose them all. 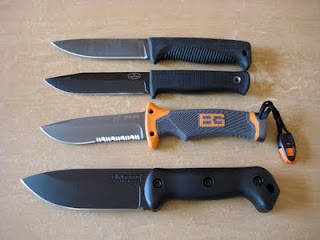 So, you wanted a good outdoors knife and thought about buying a Bear Grylls Ultimate Survival Knife, dont. What you should do instead is to get a Mora knife of any type. The Mora 2000 is good, my favourite Fällkniven F1 is also good and does everything the ”fancy” knife does.
Swedens best survival experts Lars Fält and Harry Sepp both use Mora knives, nothing fancy at all.
Nicklas Odh, Sweden 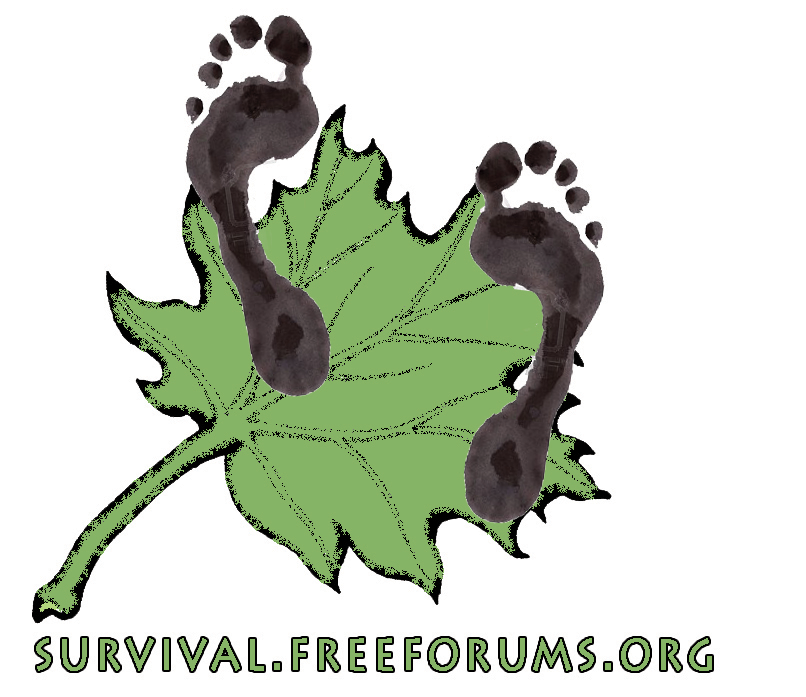